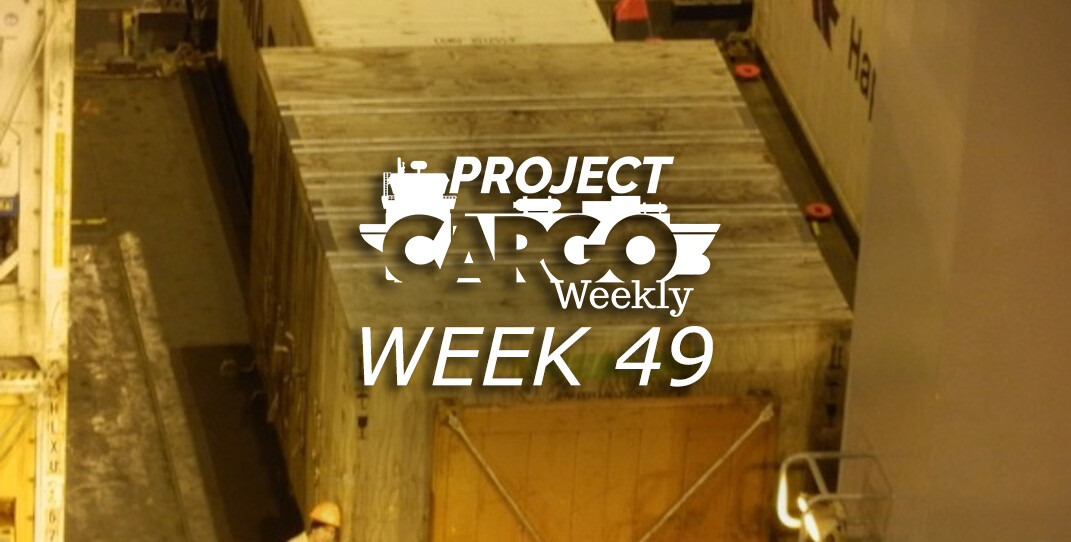 This is the last newsletter of 2016, we have sent a total of 10 newsletters in the two and a half months since we started. We have strived to make the newsletters useful. We have included the contact details of the VIPs who we interview and we have kept a cap on the number of banner ads in each issue. We plan to maintain this policy in the new year, but we are also open to any input or suggestions that you may have.

Nearing the end of the year we have faced some delays finalising a few interviews with shipowners. Those interviews will have to wait until early 2017. Some owners are busy with budget planning, which is understandable in today’s market where the fighting and consolidation is in full swing, bottom lines are under pressure.

We are however, fortunate that Blue Water Shipping (one of the major international project freight forwarders with HQ in Denmark) has responded in time for this week’s issue. They have also provided interesting pictures in connection with one of their specialities, transportation of renewable energy.

In this year’s final issue we also have a couple of interesting shipping profiles for you, one from France and one from Malta. Both profiles are of shipping people with diverse experience in the shipping industry. Both are also willing to receive an approach from you if you feel that their services are needed.

We also have a very special topic in this final issue introducing World Bank’s
Doing Business report. It is not common knowledge what the world bank actually does. This report gives a window into one of the services that they provide. In this case they provide intelligence and know-how that can be very valuable to business people. There is generally a lot of information and intelligence out there and it doesn’t have to come at a high cost, sometimes its a matter of networking.

We wrap up this issue with sector news and the video and photo of the week. Enjoy!

First issue in the new year is scheduled for Thursday, the 5th of January.
We wish you a Very Merry Christmas and a Happy New Year.

Kind regards, and until next year, I remain,

When did Blue Water start focusing on renewable energy?

Our focus on renewables started in the middle of the 90’s with wind turbines being shipped out of the port of Esbjerg. Being located with headquarter in Esbjerg it was a natural development for Blue Water Shipping to start focusing on this new and growing activity.

Profile of a Shipping Person

Nils, I understand you are a Swedish national. How did you end up in France?

Correct. I was lucky to have a year in Paris just after my military service. Twelve years later this helped to be considered suitable for a position in France. After six years in Paris, I spent a long period outside Europe. I returned in 1996 to CMA CGM in Marseille. As my wife is French, we have settled down close to Marseille after my retirement.

Profile of a Shipping Person

What duties did you have during your many years in shipping in Malta?

I was initially put in charge of an adjacent quay which consisted of a bevy of scattered warehouses. We received cargo on open barges that were loaded alongside vessels that were berthed on stream. After six years I was moved back to the deep water quay and put in charge of two sheds. Within two years I was promoted to Assistant Quay Superintendent.

The cargo weighed 46 metric tons and had dimensions of 2620 x 390 x 390 cm together with accessories on 5×40’ flatracks, in 2×40’ open tops and 1 x 20′. Upon arrival of the vessel in Mumbai, it took 8 hours before the angle of the ramp was such that the loading could be done without causing damage to the centrepiece of the plant.

Direct from their HQ in Washington, D.C., the following information can be especially helpful when choosing the best location/country for conducting business or establishing a new office.

Doing Business indicators are used a framework and monitoring tool for business environment reforms aimed at creating a friendlier and more inclusive investment climate for the private sector that will boost job creation and the prosperity that comes with it.

This service links Egypt, Malta, Croatia, Italy, and Slovenia. Thanks to a call in Malta, a CMA CGM group’s hub, efficient transshipment connections are offered to worldwide markets. Read more…

Tokyo-based Nissei Plastic Industrial Co. will be making a $13 million investment in Brooks City Base (Texas) by building a 115,000-square-foot manufacturing facility.Read more…

Japanese manufacturer Minebea will build a factory in eastern Slovakia

The Eazi Group (Southern Africa) has ordered 100 units worth $6.3 million

This footage from shot from the launch by one passenger going ashore whilst being a passenger onboard Rickmers Antwerp anchored outside the port of Haiphong, Vietnam. Currently most operations at Haiphong are done midstream and advantage here is that Rickmers has own gear by which to perform loading and unloading from barges.

Getting enough sleep is essential for all of us.  While project cargo discharge was paused in the middle of the night at Cartagena, Colombia a stevedore is seen here catching up on his beauty sleep. It’s no wonders he was tired, the time was 3am according to the passenger who took this shot.