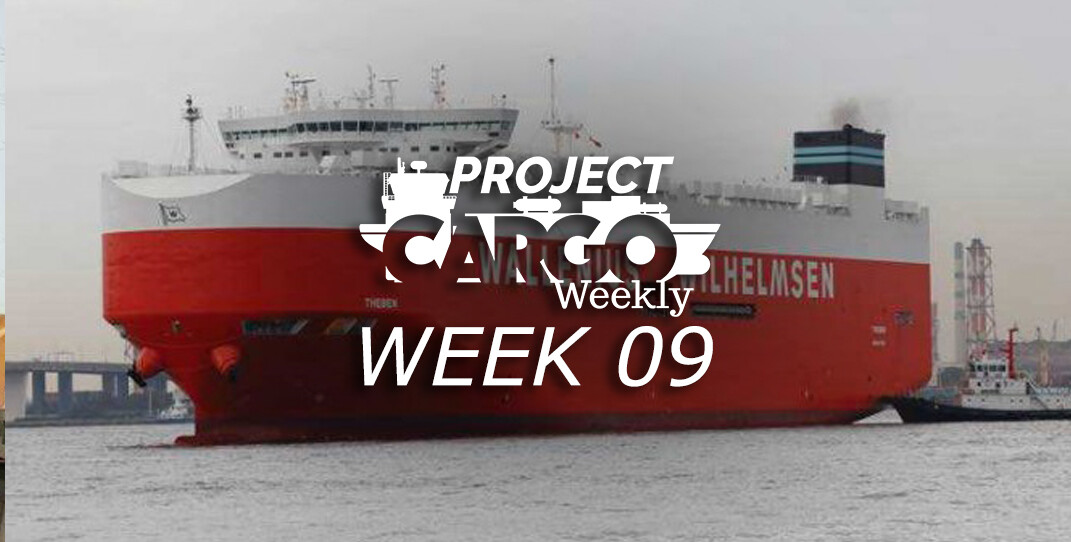 It’s Thursday 2nd March and that means it’s time for another issue of Project Cargo Weekly. Don’t forget to download our media kit if you are interested in placing a banner ad with PCW. You can be sure to get attention because we only allow a maximum of four banner ads per issue.

We recently learned from one of the shipowners we interviewed that they received a few cargo inquiries immediately after their interview was published. So it is worthwhile to participate. An inquiry doesn’t always mean a booking, but its a start! Good things take time to develop. Enough patting myself on the back, this week we have three interviews to focus on.

In this issue:
A Q&A with Wilhelmsen Wallenius Logistics, part of the World’s largest RoRo carrier
An interview with World Freight Network (a freight forwarding network competing in a competitive market)
A Q&A with Liburnia, a versatile shipping agent headquartered in the Balkans. The region is seeing a lot of development, tourism is growing and Chinese companies are there with massive investments in infrastructure (surprise, surprise)
Sector news and some other news of interest
Video and photo of the week

Wishing you pleasant reading and until next week, I remain,

“Green shipping” is high on the agenda these days, is it more of a marketing stunt from shipowners (and others) or is it a serious issue?

We have a 156-year heritage which we believe stems from taking an approach that seeks to do what is best for people and the planet, as well as profitability. Environmental and business sustainability are inextricably linked. Also, it’s important to note the two are aligned on some key issues.  Reducing CO2 is the same as cutting the fuel bill, so count on any carrier that buys fuel directly being committed to reduction.

How do you meet each other do you have global conferences or meetings on a regular basis? When is the next one due?

We meet annually in April. It’ll be our 13th event this year, in Pattaya, Thailand. That’s what makes our network special, our annual gatherings. There is the right mix of warmth, fun and productivity. Everybody works hard, but they play hard too. Everybody heads home with a warm glow, new friends and usually some new business too.

Former Yugoslavia now consists of several independent countries, does that make your business more or less difficult than before?

It is difficult to make a comparison. Yugoslavia hasn’t existed for more than 25 years. The entire industry has changed since then, especially ways of communication. Furthermore, many companies disappeared and new ones were formed. Commercial relations between countries are good and there are no obstacles to do business.

The project is planned to be completed in sixty months from the date of financial closure, which is expected in September 2017. Read more…

Dewaco will altogether deliver a total of 120 chain scrapers to Ho Chi Minh’s wastewater treatment in Vietnam, which is currently being extended. Read more…

Through its subsidiary OTV, the French company will deliver the €156 million project, which also includes 12 service reservoirs, five pumping stations and more than 430 km of transmission and distribution pipes. Read more…

Metro de Panamá has launched an invitation to companies interested in a contract to carry out a study prior to the extension of the network with lines four and five. Read more…

Germany’s Horn Glass has received an order from Siam Glass in Thailand for the rebuild of a 250 tpd end fired furnace with three production lines. Read more…

Future Now jumped aboard a container ship to meet those who keep the world running – and discovered the realities of controlling a behemoth that takes two miles to stop. Read more…

Onboard MV Rickmers Antwerp at West Anchorage in Hong Kong prior to leaving for Tianjin, China.  A special experience to be anchored outside the actual terminal and to see actual loading and discharging work being done with ships gear midstream.   An experience in shipping indeed with containerships passing frequently enroute to/from Hong Kong container terminal

Yours truly onboard mv Lutetia anchored outside the Panama Canal. Gives a new meaning to “deep sea fishing”. The food onboard was good and plenty, so fishing from the anchored vessel in the Atlantic was not strictly necessary. Good thing, because on that day the fish did not bite once.