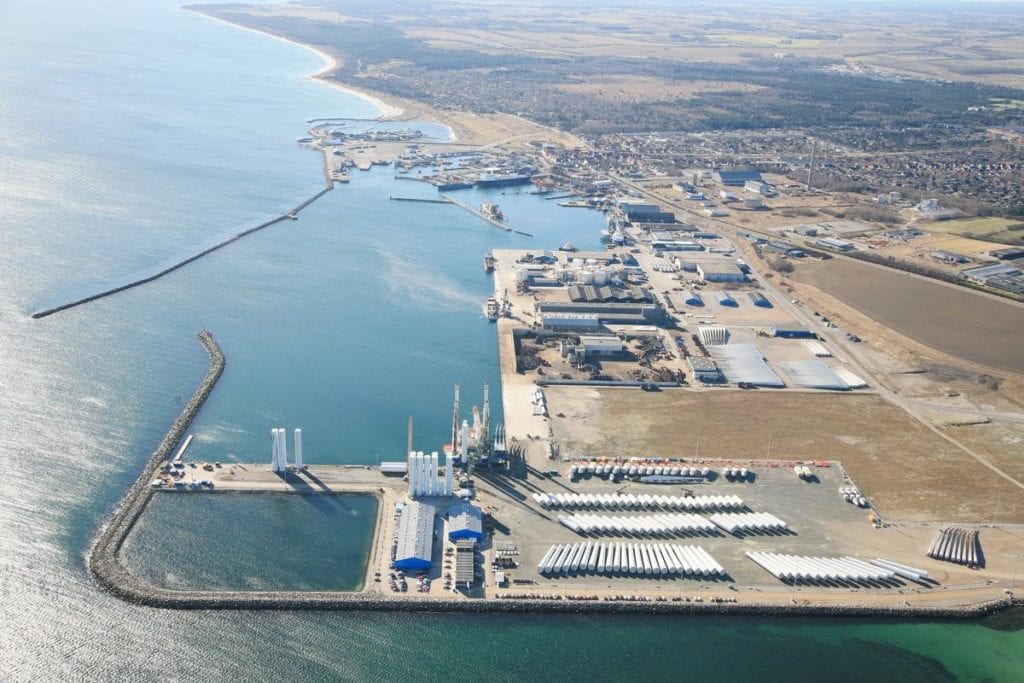 First of all tell us a bit about your career before you started working for the port of Grenaa. Elaborate on your experience in moving project cargo, including renewables etc.

In my professional career I have always been part of the logistics supply chain, starting as trainee in Scan Shipping container line division as agent for “K” Line. Hereafter I had the opportunity to start at Martin Bencher (Scandinavia) A/S in their Norwegian department focusing on oil and gas project transportation worldwide. This gave me great insight into project handling and management. The job sent me around the globe to various ports and gave me opportunities to network. As Martin Bencher received more and more renewable project inquiries they established a dedicated wind division, which I joined in the very beginning. We focused on niche businesses within wind and had many consulting jobs for wind turbine prototype manufactures looking at the overall concept development for transportation, including the considerations of roads, ports, vessels etc. This, combined with actual transportation of endless power cables for Offshore Wind Farms, general WGT transportation and assembly work in port, gave me the experience needed to continue my career in the field.

I helped to establish a new offshore wind turbine joint venture between Mitsubishi Heavy Industries and Vestas called MHI Vestas Offshore Wind A/S. I had the lead to develop the transport concepts for the markets most powerful wind turbine called V164 and commercialize it to the transport and shipping industry. This culminated in the execution on the first real scale Offshore Wind Farm for this WTG type called Burbo Bank Extension in 2016.

What made you move on from a career in project freight forwarding to one where you do marketing for a Danish provincial port?

The insight I gained in various positions within transportation “on both sides of the table” has given me a very broad network within the transport industry. This linked to the fact that projects, components, cargoes, manufacturing etc. are becoming more and more dependent on port operations, and that same set increasingly demands from ports, links these business closely together.

Ports are becoming more and more specialized within segments as the knowledge needed to handle various cargoes also increases. By becoming specialized one goal is to optimize cost in the very same transport supply chain I have always been part of. It might be that the Port of Grenaa is a provincial port looking at the cargo turnover, but the port has recently been going through a business change with a new strategy focusing on several segments: wind, project cargo, bulk, stacking, recycling, etc.

For these segments we are actually amongst the market leaders in Denmark and Scandinavia. Therefore the move for me from project transportation to marketing / business development at the port of Grenaa is not as odd as it may seem.

Tell us about the location of the port of Grenaa. Give us examples of projects that the port has handled recently.

The Port of Grenaa is in Kattegat, Denmark. It is close to the T-route to and from the Baltic region, has huge capacity port cranes, state of the art quay facilities and good water depth. The Port of Grenaa has always been used for wind turbine component exportation worldwide and oil and gas component transportation to especially the Far East.

The port expansion in 2010-11 was especially designed for the execution of the Anholt Offshore Windfarm, where the port was used for all pre-assembly activities. Back in 2013 this was the world largest Offshore Wind Farm.

Looking at today’s focus, wind still plays a major role for project cargo, together with large steel structures from infrastructure projects. As for bulk cargo, Danish power plants have recently been converting from coal to more CO2 friendly materials like wood chips and wood pellets. Therefore we have seen and will continue to see the Port of Grenaa as a natural hub for these bulk materials to and from the Baltics as a link to the African and American continents.

I saw from your office window that one of the worlds largest jack-up rigs is laid-up just outside? Tell us more about it. I also see a special vessel used for offshore projects, what can you tell me about that?

The Port of Grenaa has frequently been used for stacking and maintenance projects for offshore wind farm vessels and oil rigs. The reason for this is again our port facilities and the link to our local service providers for maintenance work.

We have hosted some of the world largest Offshore Wind Installation vessels and have a good and long relationship with these carriers, so they can optimize their vessels in between employment. It is the same story for oil and gas rigs, where we right now have Maersk Inspirer docked in the port. It is one of the world’s largest offshore jack-up rigs, so it again proves the capabilities of the Port of Grenaa.

How do you intend to increase the awareness of the port of Grenaa? Many ports attend expos around the world. How do you differentiate yourselves from the many other ports out there? How do you get known to real cargo owners?

At Port of Grenaa we can handle all kind of cargoes within our strategy, but our weakness is exactly as you pinpoint, the awareness of the port and our visibility. We are present at all major expos within wind, oil & gas, bulk and recycling in the northern part of Europe, but most of them as a guest. The most effective places for us to get the right contacts are within segment networking events and their sessions, this is our main focus.

We are also intensively using social media to tell our stories. Another channel we are using is our magazine called SUPPORT which is a combination of a paper version and an online version with videos and photo essays. Right now the majority of our articles are published in Danish with some published online in English.

Part of our focused strategy is to have a more intense dialog with our users and be more visual by telling interesting stories about the port. We know it is important to have a close dialog with cargo owners and strategic decision makers, so that we can act fast on trends within each segment and invest wisely. This way we are able to service customers today and in the future. That said, we still cooperate closely with logistics providers in and around the port. We are part of a sophisticated supply chain, so we have a very broad stakeholder management.

The Port of Grenaa is close to the biggest container port in Aarhus, Denmark. I heard from many people that in fact Grenaa is the better suited port even for container traffic, but due to political networking and indecisiveness the Port of Grenaa was never chosen for development. Is there any truth to that statement?

There was a discussion 15-20 years ago on a national level, where to locate the future container port in Denmark and one of the best positions was actually in Grenaa, but as the existing container port was in Aarhus, they kept that business. Due to our position and the city of Grenaa, where the port is far from local community and that the municipality have taken the decision never to build private homes at the port, we are focusing much more on the heavy industry and cargo segments which are noisy, smelly or dusty. Aarhus is a good container port in the middle of the city center, which doesn’t affect the local community that much, but we see an increasing interest from the users within other cargo segments at the Port of Aarhus to move to the Port of Grenaa. So we have a good cooperation with Aarhus to utilize our strengths.

Do you belong to a network of ports or do you handle your own marketing directly?

The Port of Grenaa is part of the Network of “Danish Ports”, which consists of the 15 largest ports in Denmark. The mayor of Norddjurs Municipality, where Grenaa is located, is also a board member of this organization.

Overall we are handling our marketing ourselves, but for some segments like Decom in the offshore industry, we are in close dialog with other northern European ports within the same segments to network and share knowledge.

Networking is important for us, therefore we are also part of various networks locally, nationally and globally, especially within the wind and offshore sectors.

Your geographical location is on the East Coast of Jutland which is the main part of Denmark, what kind of catchment area do you expect to reach for the port of Grenaa? The Baltics, Norway and Sweden including the Northern part of Germany and Polish ports are not far away but are also competitors. How do you view the competition?

In general the competition is hard, but we also see that each port is focusing more intensively on some cargo segments, thereby leaving other segments out. 10 years ago all ports could and would do everything. Now the requirements to service segments like wind, offshore, bulk and recycling are causing some ports to look at other segments. Some ports have difficulties increasing water depth, which excludes them from servicing larger vessels, others are located around local communities, making it impossible to expand. We don’t have these challenges in Grenaa, therefore we will be part of the hub function to/from the Baltic/Scandinavian countries in the short and long term. We see the future brining more cooperation between ports, but still with competition.

Finally kindly advise if you send out a newsletter how/where to sign up for it? Please also provide the contact details of who should be approached at the port of Grenaa.

Yes we have our magazine “Support” in Danish and online news in English. These can be found via the following links. We also kindly ask everyone to follow us on LinkedIn for the international news and Facebook for the more local news.