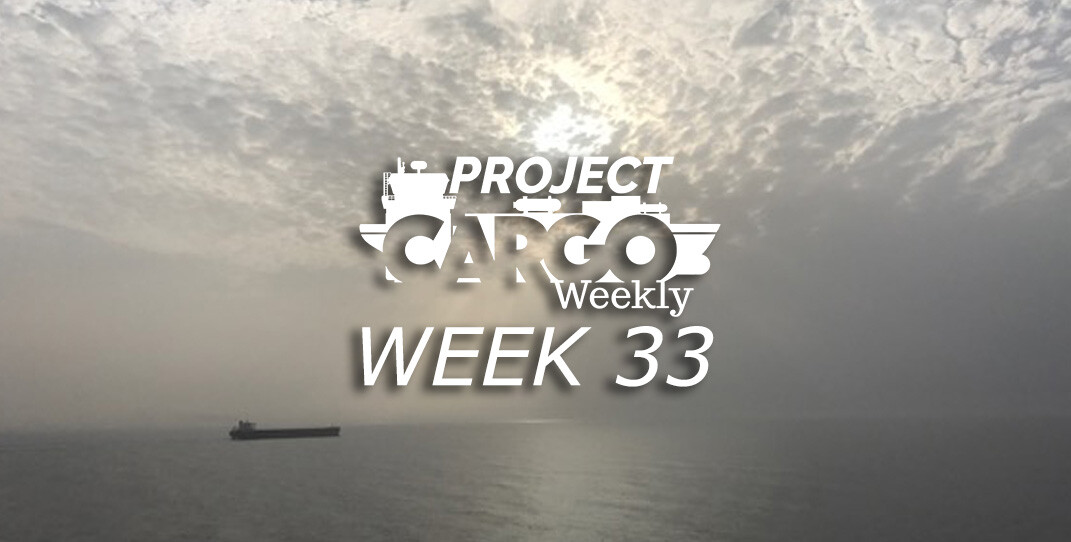 Thursday has arrived and there are definitely two good things to say about that. One is that you have a chance to read our newsletter and another is that the day after is Friday. We will be covering regions from the Caspian Sea to Greece and Australia in this week’s issue. I hope you will find the interviews interesting and useful in your business.

Shipping to Asia in particular seems to be on a roll, we just heard Maersk Line unveiling their latest quarterly results and according to many observers container shipping hasn’t been this good since 2010. Of course it all depends from which bottom level you base your calculations, but let us hope that shipowners now start to pay off their debts to the banks and perhaps for once the banks could start paying off their debts to the taxpayers for bailing them out previously. I suppose that remains to be seen.

We also still need to see the results after the recent large scale mergers and acquisitions. One thing that we can count on is that the mergers will lead to job losses, they almost always do. It seems to be the rule now that whenever a new CEO takes over the first thing to do is let go of hundreds if not thousands of people. How about developing instead of cutting and how about keeping a cap on one’s own parachute and bonus? As Gordon Gekko put it in the 1984 movie Wall Street “Greed is good, greed works”. But in my opinion the shipowners could take a look at level of sacrifice many seafarers make in being away from their families for as long as 9 months at a time. Being green is not the only parameter to follow, how about also taking social responsibility to the next level?

With these few words I wish you very happy reading this week and a pleasant weekend to come.

How does one transport containers to & from the Caspian Sea as it is “landlocked”.  Kindly explain to our readers about the ways and means one can reach Aktau.

Primarily there are three main “corridors” through which cargo can be transported. The largest “trade lane” for Port of Aktau is to and from Iran, where the ports of loading are Bandar Abbas, Anzali, Amirabad, Noushahr and some other smaller ports on the Iranian side of the Caspian.

What business is Silverback Container Management is engaged in?

Silverback Container Management provides a matching service of container owners and users to reposition or supply containers in surplus and deficit locations around the globe. We have been providing this service for 22 years now, saving our customers millions of dollars in empty repositioning costs and container hire.

Are you focusing mainly on business in Greece or do you also handle international assignments such as cross trade, for example between countries not physically involving Greece?

It is for sure our main goal to remain well-established within the local market, but I cannot say it is our primary one. I believe it is not that wise in terms of long-term sustainability and development of a company doing business in a small market like Greece (especially during such a difficult economical period) to be based on a limited “trading area”.

The cargo was loaded on four separate voyages at the Yanda Module Yard in Jiangsu, China, with the largest piece weighing 690 metric tonnes, and measuring 28 metres in length, 17 metres in width, and 26.7 metres in height.

Consisting of two Stan Tugs 2608, three ASD Tugs 2411, four ASD Tugs 2810, two ASD Tugs 3212 and a Multi Cat 1908, the shipment is a strategic positioning of built-for-stock vessels in Europe, the shipbuilder said. In line with market needs, Damen has strengthened its ability to provide swift deliveries for clients and operators in Europe, Western Africa and Central America.

INTTRA, the ocean container shipping industry electronic transaction platform and information provider, and container shipping provider SM Line announced an agreement that will expand INTTRA’s reach in Korea and globally, while offering SM Line an advanced network to create value for its customers.

Safety in the Intermodal Supply Chain: Promoting the CTU Code

London International Shipping Week takes place between 11th and 15th September, during which an event at the IMO will focus on the correct packing of Cargo Transport Units (CTUs) and the safety issues that result from poor packing and securing practices. ‘Safety in the Intermodal Supply Chain’ will promote the awareness, understanding and implementation of the IMO/ILO/UNECE Code of Practice for Packing of Cargo Transport Units (CTU Code)[1]. The event will take place on Tuesday 12 September at 17:30 in the IMO Building, London and will be followed by a networking reception.

Sri Lanka has signed a $1.1bn (£837m) deal with China for the control and development of the southern deep-sea port of Hambantota. Read more…

Vision-Box has signed a contract with the Australian Government to implement the world’s first automated ‘contactless’ traveller clearance processes at the country’s airports. Read more…

The ceremony marks the start of construction on the US$311.5 million Phase One of the Emboodhoo Lagoon project development — comprising a three-island-resorts concept, with a core island Township bringing a veritable wealth of world-class F&B, retail, entertainment, recreation and leisure-lifestyle experiences to the Maldives for the very first time. Read more…

PJSC KuibyshevAzot, one of the leading companies of the Russian chemical industry, and Maire Tecnimont S.p.A. (Milan, Italy; www.mairetecnimont.it) jointly announced the incorporation of a joint-venture (JV) to develop, build, finance, maintain and operate a green-field urea plant, to be implemented in Tolyatti, in the Samara region of the Russian Federation. Read more…

Turkish contractors have secured some US$220 billion in contracts beyond national borders in the past 10 years, according to the country’s Economy Ministry. Read more…

Helsinki to boost economic relations with Singapore via new collaborations in R&D, innovation, education and healthcare

Flat Rail is a proven, tested, certified system welcomed by leading container carriers that has been in use for the last 6 years, mainly shipping yachts out of France. The challenge came from an ever increasing number of yachts between 12-15M length which could not be loaded on 40ft flat racks owing to the corner castings being blocked by the cargo, resulting in needing to ship as break bulk.

A simple solution to convert these shipments to OOG was invented by connecting 2 bars with twistlocks to the top castings on the flat rack and then loading as normal by connecting wires from the container gantry for lifting.

For container carriers, it means the cargo is no longer treated as breakbulk, after all it’s a straightforward lift on and lift off using the gantry crane. That translates to quicker loading, reduced HSE impact and fewer slots occupied, which can translate in to more efficient pricing and options for freight forwarders. Read more…

Click here to see it in action
For further information or to get a quote contact:
info@bespokeloadsolutions.com
Tel +44 2380 480400

The 6th International Conference Heavy Caspian 2017 (October 19 in Tashkent, Uzbekistan) is devoted to transportation, lifting and assembly of heavy and oversize cargoes in Central Asia & Caucasus.

Active development of the Caspian Sea offshore and mineral resources of Central Asia has resulted in a boom in the oil & gas industry and associated facilities in the regional countries. This calls for implementation of complex projects related to delivery and construction of offshore drilling platforms, artificial islands, oil refineries, pipelines, etc. More than 600 strategic projects were implemented for the last 9 years only in Uzbekistan, including building and reconstruction of oil-gas and energy industry related facilities. As a prospect, Uzbekistan plans to implement another 900 new projects in the industry through 2019, where they are going to use in total 41 billion dollars.

At the same time, Central Asian logistics is distinguished by a number of geographical and administrative features. The conference will feature discussions over all aspects of OOG and Heavy-lift logistics in the region.

The conference of 2016 gathered more than 70 delegates from Kazakhstan, Russia, Uzbekistan, Turkey,  Denmark, Georgia, Germany, UK, Italy and the Luxemburg.

If you are experienced in delivering cargoes to Kazakhstan, Turkmenistan, Uzbekistan, Azerbaijan or Tajikistan – you have an opportunity to take the floor at the event! You can also recommend interesting speakers and topics that are worth highlighting.

Ships of the future – full steam ahead into ‘driverless’ seas?

We have all by now heard at least something regarding the ongoing march towards putting driverless cars on the roads. Less visible in the mainstream transport and technology press, though, is the significant work currently being put into the development of autonomous ships. Read more…

Onboard a Container Ship in the Strait of Malacca

“If you set out to be liked, you would be prepared to compromise on anything at any time, and you would achieve nothing.”