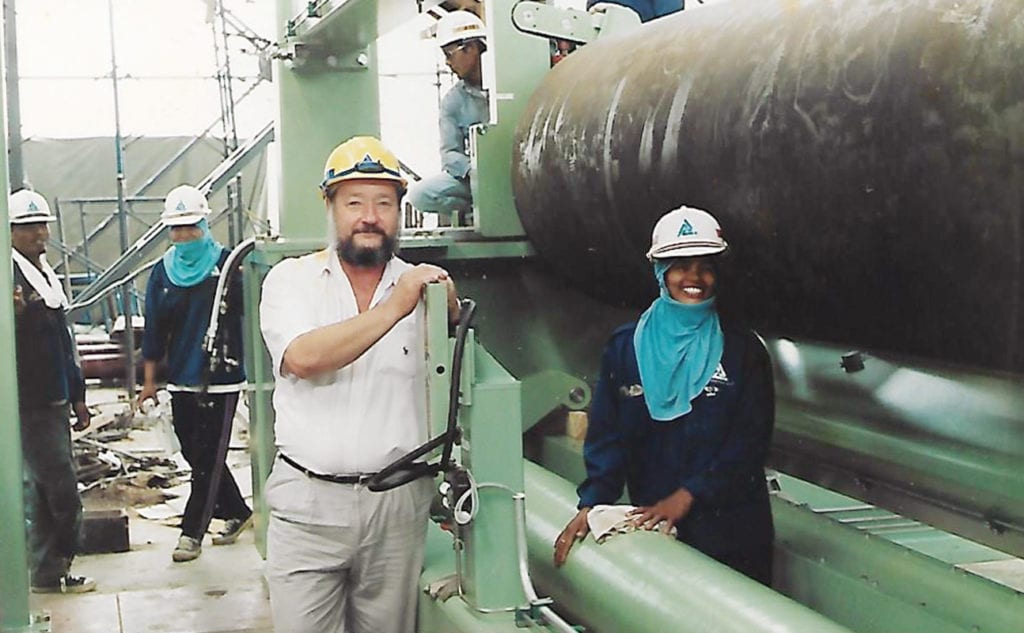 Mikko, tell our readers a bit about yourself, I understand that you have a very close relationship with South America and that you arrived there in your very early years. What prompted that originally?

What happened here is that an old friend of my father’s offered him a good position in a company he managed in Argentina.

The school year in Argentina starts March 1st, so learning Spanish was necessary. That was complete to a satisfactory level by March 1st, 1952 and off to school I went.

You worked for one of the World’s largest exporters of paper & pulp machinery, Valmet, elaborate on the nature of your work for them in the past and tell us a bit about the projects that you were involved in.

With Valmet my job was to oversee the field installation of paper machines supplied by Valmet to overseas customers.

These machines are huge, about 100m long on average and the shipments normally consist of 350 to 400 containers.

My duties included the reception and overland transportation of these containers, sometimes quite long distances in different environments. During my 22 years with Valmet I did 9 complete line installations: Two in south America, Argentina and Colombia and a few in North America, Portugal, Sweden and Thailand.

How many languages do you speak?

I am fluent in three: Finnish, English and Spanish. I can manage to communicate about shelter and food in Sweden, Portugal and Italy.

I met you some 10 years ago in Bangkok, Thailand – tell us about your time in Thailand where I understand that you were involved within the Thai/Finnish business community.

After the paper machine installation was completed and the factory was in production Valmet decided that I would stay in Thailand to service exiting customers and to promote Valmet products.

As representative of Valmet in Bangkok, I was invited to join the Board of Directors of the Thai Finnish Chamber of Commerce.

I stayed in that board for 12 years and was voted President of it two times for a total of 8 years.

Have you dealt directly with shipping companies and/or freight forwarders in your time or was that mainly taken care of by the shipping department? Tell us about the importance of having a reliable shipping company to deal with for you as shippers representative.

It turned out to more complex than expected as my boss had decided to send the cargo by land but he had missed one bridge during his route inspection. That bridge was not strong enough to support the weight of an 80 metric ton generator.

To complete the shipment I rented two barges, a tug boat and a 1000 ton floating crane and sent the goods to Asuncion by river.

By the way, I installed 25 gas turbine units around South and Central America, the Caribbean and one in Newfoundland.

How does living in Argentina compare to living in Thailand? I understand that you also lived in Kenya before taking up residence in your native country Finland, please tell us more.

Work is work and does not change from Argentina to Thailand. For me, being a Finn, it was somehow easier to relate to the Argentinian way of working and expression. In Asia, it is more difficult to understand the customer’s needs. A yes answer in Asia only means that your interlocutor has understood you question or proposal. It does not mean acceptance yet.

In Kenya I worked on a project of the Finnish Ministry of Foreign Affairs promoting Finnish products to Kenya.

There were two projects that were interestingly complicated. Those were the paper mill installation in Cali, Colombia and a paper machine installation in Thailand. In both projects, there were three nationalities involved. In Colombia, a Colombian purchaser, a French supplier and an American project management.

In Thailand, it was a Thai purchaser, a Korean part-owner and construction management and our Finnish way of doing things. For some reason in both cases the different parties were convinced that I had the holy book for solving their differences and that brought some interesting problems to my door.

With shipping and overland transport, there was always the duel between safety and efficiency. The contractor’s objective is to do the job fast and cheap while my objective was to do it fast and safe. So, routings, size of vessel, lorry and cranes became subjects of sometimes heated discussions.

What have you liked the most during your extensive career abroad?

And what have you disliked the most during your time abroad?

What annoyed me most was the arrogance of people from developed countries in not trying to understand the idiosyncrasies and needs of the people in the developing countries that they happen to find themselves in.

Fast forward to the present. When did you return to Finland and what kind of job are you involved in now? With the experience that you bring to the table if a reader would like to get in touch with you, how can they to reach you?

Me and my wife returned to Finland this past summer and our time has been invested in relocating here. House hunting, unpacking, etc.

As for work, I am presently busying myself creating connections between Kenyan and Finnish companies.

Both countries have many things to give to each other, one needs only to find the way and the right contacts to do it.

PS. A note of interest

In 1960 I travelled back to Finland to enter my compulsory military service. Years back the Finnish Government would pay you repatriation, if you happened to be abroad when it came the time to serve the homeland.

In 1960 that was no longer the case. My father was able to, with the aid of a friend, get me a posting on a Finnish cargo ship for the trip Buenos Aires-Helsinki.

I worked my way as a deck hand, but was bunking in the engine room crew side. My cabin buddy was a young man who had been accepted at the chief engineer school in Finland.

This young man, bright as he was, did not have a very good hand at mathematics and did not know how to use a slide rule. This, combined with the fact that my father, very wisely, had not given me much pocket money for the trip and therefore I was short on capital, made me offer him my services and we agreed as follows.

I sold my friend a 13cm slide rule, I happened to have, complete with an instructional course. The agreed price was USD 30. My friend learned the use of the slide rule and I arrived in Rotterdam with money.

Money that I put to good use enjoying the delights of Rotterdam, Chinatown included.