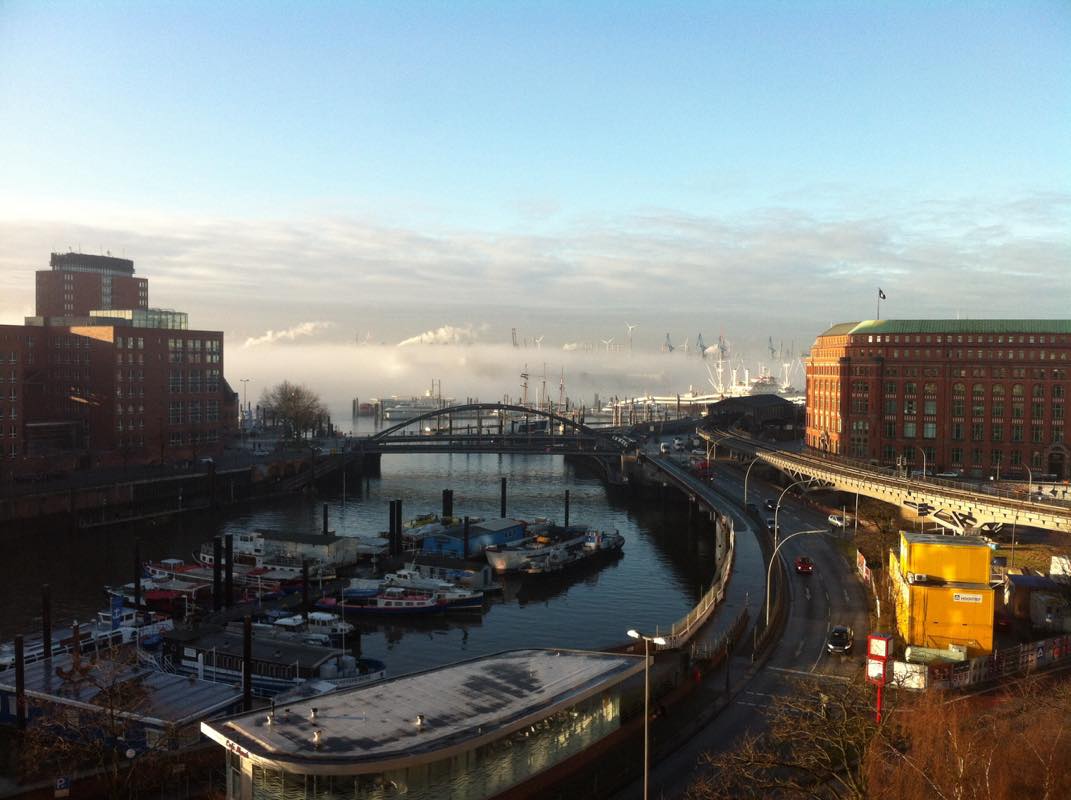 Hans-Peter I have known you for many years, in fact I believe since the mid eighties. Tell our readers a bit about why chose a career in shipping and freight forwarding.

Hello Bo, thanks for asking this question – a question I have to ask myself because that’s quite a while ago. Maybe, living in Kiel nearby the famous “Kiel Canal” and regularly watching the ships going by sparked an interest. But I rather think that my interest in the English language and – more importantly – what got my attention was the fact that my father’s junior boss had completed an apprenticeship as “Shipbroker and Liner Agent” before joining his father’s trucking company. He was some years older than me and his colleagues were meanwhile working in Hamburg, Singapore and Monaco. That was thrilling. Also at that time shipping still had a sense of “adventure”, ships were still in port for days and not just hours.

So I started my apprenticeship in a small company, we were only 9 people. I still consider this as a good choice, all jobs that were part of the business had to be done quickly, on top of emptying the paper baskets in the morning and fetching/dispatching the whole company’s mail. I quickly learnt what 24/7 meant, long before this became a catchword. But I have never regretted this choice. Is it difficult to become a shipping person in Germany?

Germany has a strong tradition of “Apprenticeship (Ausbildung)”. This is not like “on-the-job training” but a regulated, 2.5 to 3 year education, including interning at the company and attending the respective business school on a rotating schedule. This is valid for nearly all professions in technical jobs, craftsmen, the service industry and merchandising. At the end the apprentice has to take exams and if successful receives a certificate. This is also valid for the shipping industry, here it is called “Kaufmann für Schifffahrt und Reederei”. So, young and interested people have to apply to companies for this apprenticeship and go through this education. It is not rocket science, but besides acceptable school marks one should have an understanding of figures, a talent for foreign languages, and nowadays solid computer know-how.

Besides being a lovely city Hamburg is very much the heart of the European shipping industry. How many people would you estimate are working in shipping or a shipping related field in Hamburg?

That question is more than a hot potato, any estimate could be grossly wrong. A problem is that “shipping” is a very diversified business field, starting from ship-owning to ship management, the various niches of shipping like container, bulk, liner, tramper and the adjacent businesses of agencies, crew management and brokers.

Also, we should not forget that Hamburg is still a powerful and prosperous port with terminals of all sizes and diversified duties. Last but not least, Hamburg is a growing port for the cruise industry. I would think that 50,000 isn’t an exaggerated figure, but I could be wrong.

Tell us a bit about your experience in shipping and the various posts you have held from the beginning.

Ok, in brief: After the three year apprenticeship – as with most German young men – I had to complete my military draft service. I chose the Navy for that and signed on for four years. It gave me the chance to go on a vessel and to see the other side of shipping, plus the education of a non-commissioned officer. But 4 years was enough and I went back to work in Kiel.

I have to admit that Kiel is not the center of the global shipping industry, so I decided to gain some more experience. The next stop was Hamburg, doing services for a small agent with a RoRo Liner service to the UK. Then I changed, first to the agent for the then newcomer “CMA”, then to the agency for COSCO, where I made my first contacts with the developing container industry.

In 1990 I joined Hanjin, at that time they moved their Europe office to Hamburg and upgraded it to a regional headquarter. I never thought that this employment would last for 27 years. But in the end it wasn’t only one job. In my 2nd year they dispatched me to Dusseldorf to open their first own hinterland office and at the same time support the opening of Frankfurt and Munich offices.

Back in Hamburg in 1993 I started with extending the agency network in Scandinavia, looking after the opening of our own offices in Poland, Czech Republic and Hungary and started building up the Mediterranean business.

In 1996 I got a strange call from a Korean person who wanted my opinion on a competitor carrier: DSR-Senator Lines. Though I was on a short holiday outside Hamburg, the guys were not shy to meet me in the middle of nowhere on the North Sea coast and we had talks for hours. When coming back to the office I was directly dispatched to London on a “top secret” mission. To cut this short, after meeting with the M&A consultants I spent some weeks with this team in Bremen doing the due diligence and preparing the takeover of DSR-SEN, I even had the honor to sign the contracts on behalf of Hanjin.

Honestly, I was happy to return to the Hamburg routine after that, as this was not really my cup of tea and the result did not meet my expectations. But it was the wish of the Korean Chairman, so, what to do?

Then e-commerce began to trend, B2B, B2C, B to anywhere being the catchword, and nobody had a clue what it was about. I joined the IT department to add a commercial sense to the bits and bytes of this new world. So, we started working on upgrading our own systems and programs and at the same time starting discussing about portals. GT-Nexus and INTTRA were inaugurated in those days. It was an interesting time, everything was new to most of us and the major task was to tame the IT mavericks into business channels.

Then Senator Lines was calling again. It was the kind of offer you cannot say No to it. I was lured away with the promise of reforming and re-organizing the organization to a more powerful and flexible operator, I ended up with the task of assisting to negotiate redundancy programs, closing trade lanes and firing people. That was definitely not what I was supposed to do, so I returned to Hamburg with a bit of anger and the strong will to quit.

But before leaving the company at that time, I was asked to support a new project. We just had a dramatic accident with the “HANJIN PENNSYLVANIA”, which highlighted the need for better dangerous cargo management, and I was requested to manage this for the European area. Once this was up and running, the next task was to extend and improve the European feeder networks in the North and in the Mediterranean.

At that time I was contacted by a Korean colleague I had known for years. He asked me about North/South traffics, something Hanjin wasn’t really familiar with. I came up with some business plans and ideas, this resulted in me flying into West Africa, scouting the agencies, negotiating contracts with the terminals and the J/V agreements with partner lines and setting up respective services. I might annoy a few fellow readers, but honestly: “Lagos, you have to love it or leave it!!” I chose the second option!

Then all of sudden the request for becoming the compliance officer for the company in Europe reached me as my predecessor retired. Not being a law man nor having much talent for this (meaning lawful behavior) I understood the need for such a position and worked myself through all the paperwork and paragraphs. It was the time when most carriers were under suspicion of colluding deeply with each other, understandable from the outside, pure nonsense from the inside. The respective dawn raids showed no results or evidence of collusion between Carriers, but the public remained suspicious. This was the reason European Commission’s Directorate-General for Competition could force carriers to sign up for a “voluntary” code of conduct.

Yeah, and then this all came to a sudden end! In early 2016 there were the first rumors about financial discussions between Hanjin, the Korean Air Group and the Korean banks. The whole thing boiled up over the summer and ended with a big bang on the 31st of August 2016. The rest filled pages of gazettes worldwide.

Liner shipping has seen many changes in recent years. You worked many years in Hanjin, regrettably this reputable Korean name is now no longer. How did you view the situation as an employee in a local overseas Hanjin branch, far away from the head office in Seoul. Did you know that something was wrong, if so when?

Ok, I will try to answer this the short way: Yes! Yes! NO!

Yes, there were and are many changes in the shipping industry, mainly in the container liner industry and we have not seen the end yet.

Yes, I have worked for Hanjin 27 years and from the inside you are naturally the last one to notice when there is fire on the roof.

Honestly, for me the whole story started already with the demise of the late chairman Mr. Soo Ho Cho ten years ago.

After that there were many mistakes on the management side, the top management changed faster from year to year, and finally also the quality of the Korean management left a lot to be desired. Local staff in managing positions who had experience with day to day business were driven out of the company globally, thus leading to a brain drain. The Koreans who replaced them were not well equipped to manage this.

My thesis is that, in the end, the quality of the top management was so poor that they did not even understand what consequences the filing of insolvency before a Korean court would have for the global organization. To me it looked like a local dispute and diverging interests between certain parties and people went grossly wrong.

Is it difficult to find a replacement job at the moment in Hamburg?

Not if you are a young and talented person with a good education in the shipping industry and – nowadays more importantly – with a good command of IT related systems and programs.

But reaching a certain age, level of experience and income the air gets thinner. So, like hiking on a high mountain, one needs a long breath and patience.

The funny thing is that companies which may not survive the next 3 years for several reasons are the first ones that look for “staff with a long term commitment” to the company.

With your experience I am confident that something will emerge soon – if anyone of our readers would like to get to know more about you – how can they contact you?

It is very easy: hans-peter.becker@gmx.de