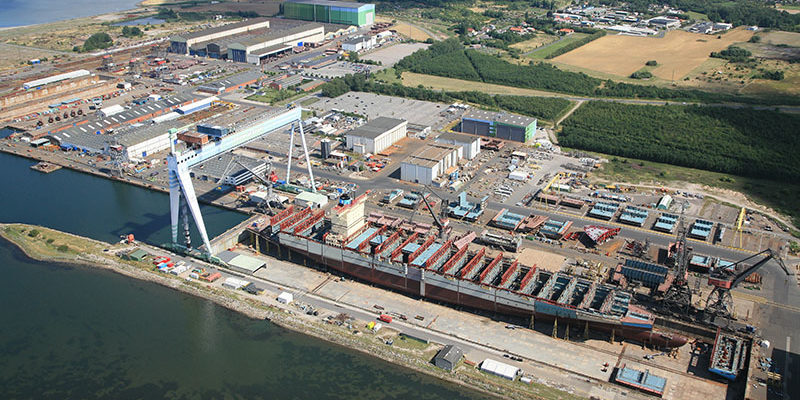 Odense is in Denmark and is famous for a Danish storyteller as I recall, yes? Can you tell us more?

Following your reference to the most famous citizen of Odense, the world-renowned Danish storyteller Hans Christian Andersen, I will lead you through the story of the Lindø shipyard. Besides being an integrated element of Danish industrial history, the story of Lindø contains all the ingredients of a good story.

Initially, you can sense the entrepreneurship, the continuous strive for development but also the rough and tough work of shipbuilding from the early days, shortly after the end of the first World War. After years and years of growth, development and expansion you can sense the dark clouds gathering on the horizon when it was decided to close one of the crown jewels of Danish industrialization in 2012.

Thousands of direct jobs were lost and many more in the related industries. The era of large-scale shipbuilding in Denmark had come to a remarkable end. But like in every good story there is a happy ending. You can witness how the new Lindø port of Odense, like a phoenix, rose from the ashes, ready and able to meet the requirements of tomorrow.

It all began in 1918 when Mr. A. P. Møller founded a shipyard alongside the canal leading to the city of Odense. The shipyard became a part of the A. P. Møller/Mærsk Group and many new buildings were delivered over the years to the Maersk Group as well as to other shipowners. In the late 1950s, the new buildings grew ever larger, which challenged the relatively narrow Odense Canal, already inaugurated back in 1806. It was evident that a new shipyard that could match tomorrow’s requirements had to be built. The new site was found at the entrance to the Odense fjord, where there were ideal conditions for establishing a new shipyard – the Lindø shipyard.

In 1959, the technically advanced Lindø shipyard, with the capacity to build up to 200,000 DWT vessels, was ready to build its first ship. The shipyard specialized in building large, modern tankers which could provide the western world with the energy required by the massive economic growth of the 1960s. When the first supertankers were brought into service in the late 1960s, this once again placed heavy pressure on the shipyard’s capacity and, in 1969, a new 650,000t capacity dry dock was inaugurated. The dry dock measured an impressive 415 x 90m. In the yard’s heyday, at the end of the 1960s and the beginning of the 1970s, more than six thousand people were employed.

At the end of the 1980s, the shipyard adjusted to meet the growing global demand for long-distance freight transport stimulated by massive industrial and economic growth in the Far East. Container transport became one of A. P. Møller-Mærsk largest commercial activities. The Lindø shipyard specialized in building large containerships, but in 1993 the Lindø shipyard was also the first shipyard in the world to build a double-hulled tanker.

So, besides history, Odense and the Lindø shipyard were also famous worldwide. What’s the main reason for this?

The Lindø shipyard was famous for being part of the international shipping conglomerate, A. P. Møller/Mærsk, with an everlasting ambition for continuous development. To maintain a competitive advantage, it was vital for the Lindø shipyard to be at the forefront of technological development.

The use of robots and other advanced-technology solutions made it possible to develop new types of vessels as well as keeping production costs down. The Lindø shipyard acquired shipyards and production facilities in Estonia, Lithuania and Germany to protect and safeguard its competitiveness concerning labour cost. From the early days, the Lindø shipyard continued to meet the challenges by setting new world-renowned standards concerning innovation, capacity and design.

How many ships did the giant Maersk Line build at Lindø and when did the shipyard originally start its construction business? What prompted the closure in 2012?

When you talk about shipbuilding at Lindø, it’s only natural to focus upon the construction of the giant Maersk Line container vessels. However, the true story is that from the beginning in 1918 right up until 2012, the Lindø shipyard group produced an impressive 528 new buildings, comprising virtually all types of vessels in an un-ceased process of renewal.

The closure was finally prompted by the fierce competition from Asian shipyards which, through a combination of cheap labour and public subsidies, were able to construct vessels at a cost which a Danish shipyard couldn’t match.

The 10,000-dollar question is what to do with a used shipyard if not build ships? Would you please elaborate on the current use of your facilities since the cessation of shipbuilding at Lindø?

After the closure of the Lindø shipyard in 2012, the A. P, Møller/Mærsk Group took the initiative to develop the Lindø Industrial Park to maintain heavy industrial production at the site. However, it was evident that an international shipping conglomerate was ultimately not the right owner and developer of Lindø. In 2014, the Lindø site found its optimal owner when the Port of Odense bought the now-former shipyard from the A. P. Møller/Mærsk Group.

The Port of Odense had already developed a brand-new port terminal adjacent to the Lindø shipyard and it was now the only natural to focus upon harvesting the synergies of running the port terminal and the industrial complex in a successful commercial symbiosis.

The first commercial leg is heavy industrial production, with a clear strategic focus upon on and offshore wind. It is a clear tendency that the wind turbine industry grows ever larger, which ultimately will prevent over-the-road transport. It is also a clear tendency that on and offshore wind must prevail in future without public subsidies. At Lindø, the wind industry can set up their production adjacent to state-of-the-art port facilities that give a huge logistical advantage and at the same time, they can share unique loading facilities which help to lower the loading cost per unit.

Lindø is already home of MHI Vestas Offshore Wind’s assembly of the world’s largest offshore wind turbine, the impressive 10MW V-164. Lindø is also a centre for Bladt’s production of large offshore foundations for the wind industry. To supplement production a vital element of the strategy is to attract testing facilities and Lindø is already the home of one of the world’s most advanced nacelle testing facilities.

The second commercial leg is the marine industry centred around the repair yard, FAYARD which over the years at Lindø has built a strong international position as one the most efficient repair yards in the region. FAYARD has its origin in another Danish region but was forced to relocate its entire business due to the prevailing appetite for transforming port areas into residential areas. At Lindø the shipyard found a haven for developing its business. The shipyard has successfully focused on retrofitting scrubbers.

The third commercial leg is the port business which has one foot in the traditional bulk and breakbulk market and the other in the project market to support and continuously develop the two aforementioned markets, the heavy industrial production and the marine industry.

But back to the question about the uniqueness of Lindø:

Would the yard and its facilities be interesting for overseas contractors perhaps? what kind of facilities, access, cranes etc are available currently?

A long list of facilities is available for overseas contractors. As described earlier, many of these facilities are of international standard and some are simply unique. An overseas operator will also be able to take benefit of our plug-and-play solutions where the Lindø site can provide access to a comprehensive list of integrated services, e.g. welfare facilities, canteen, offices, conference facilities, parking etc. An overseas operator will also be able to benefit from the long list of subcontractors that are already at Lindø and provide their services to the heavy industrial production, to the marine industry and the port industry. And every overseas operator will finally be able to take advantage of the Danish labour model enabling an employer to hire and fire according to demand.

How to get in touch with you for further information?

It’s simple: get in contact with a member of the sales team who will set up a meeting with the relevant members from our team including technicians, engineers and navigators.
Website: https://www.lpo.dk/
Email: ohj@lpo.dk