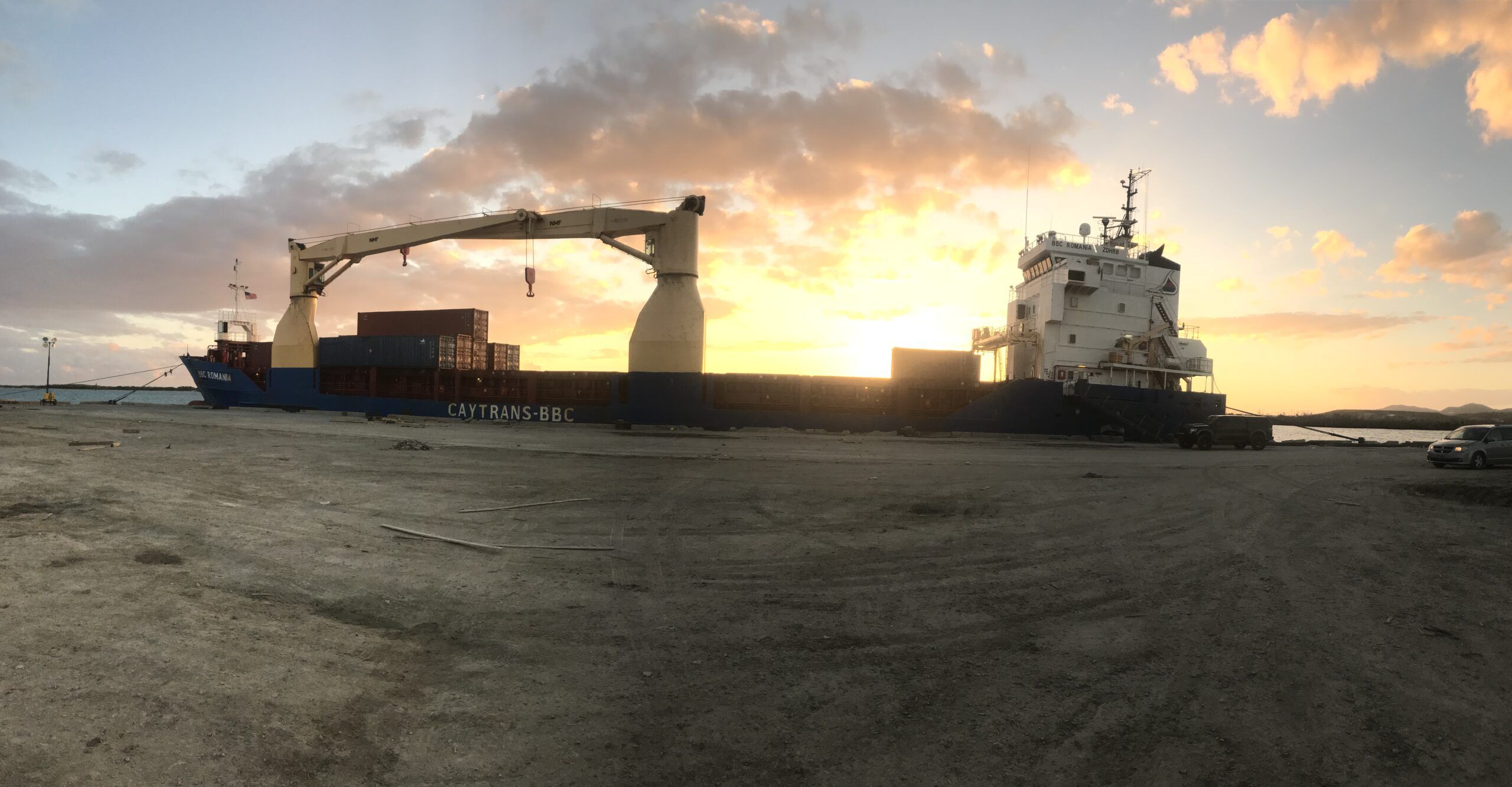 First of all Niels, you are a Danish native but you have been residing in the US for many years right? Could you tell our readers a little about your own story, i.e. getting into shipping in the first place and ending up in the US Gulf?

Sure, my dad sailed for the East Asiatic Company for a couple of years as a Steward on board M/V Kambodia. I always enjoyed listening to his experiences on board the vessel and of the many places the job on board would take him, mainly Far East/USWC, etc.   Hence, I started my shipping career in Aarhus, Denmark in 1976 where I worked for a company called Bergmann, Smith & Co., which was a branch office of the old East Asiatic Company.  It was a 3-year apprenticeship with a broad education which involved anything from handling containers on both the export and import side, refrigerated and frozen cargo, break/bulk both in containers as well as break bulk on ro-ro and conventional tonnage loading/discharging right outside our office.  It was a great well rounded education which also included agency, operations, documentation from the ground up, dealing with railroads, truckers, and of course, the ships.

In 1980, I moved to New Orleans as a boarding agent for the biggest agency in the US at the time.  The company was called Hansen and Tidemann, Inc., and it was a demanding job.  We handled up to 80 vessels per month and had 5 boarding agents plus 5 inside operations people, plus a manager just to handle the operational part for vessels calling on the Mississippi River.  A typical work week was 80 hours, but I was young and eager to learn, and boarding all types of vessels such as tankers, bulkers, tweendeckers, etc.—all  of different nationalities—was an excellent experience.  After my 3-year plus venture, I worked for a few other companies, one which included equipment control, which I did for 5 years, and others related to regular agency business.   In the late 80’s, I joined Gulfship Marine, Inc. as an operations manager and was also introduced to the chartering part of the business, especially for project cargoes, which I found interesting and challenging as each job was different, so never a dull moment.   In 1990, I joined Intermarine, Inc. as one of the founding partners, and I finally established Dan-Gulf Shipping, Inc. in 1993.

What is the main activity of Dan-Gulf Shipping?

Dan-Gulf Shipping, Inc. is a managing company that has been managing a variety of services for its exclusive principals such as Caytrans Project Services (Americas) Ltd., which traded worldwide for many years, including Cuba as one of the first companies for this trade lane when permitted with OFAC licensed cargoes, mostly grain in bulk.   In 2004, we landed a mining contract from the USG into Colombia for the currently biggest mining company in Colombia, Drummond, and we have maintained that contract ever since.  Having that contract naturally led to many other opportunities for ports en-route, and for many years we had the BP, Ecopetrol contract also into Colombia but were also very active overall into NCSA, mainly catering to the oil industry mostly moving southbound.  The voyages also combined well with the Caribbean Island trade as well as ECCA.  The northbound business back to the USG would normally consist of pipes, bulk cargoes and break bulk, including cross trades in the segment.

I have it on good authority that you are an expert in moving cargoes into the Caribbean and North part of South America. Tell us more please about the services you provide.  Is it own, chartered or operated tonnage,  and what is your strength in that area?

I always liked partnerships, although it is hard to find good partners, but we are now running the Caribbean service on Oslo Caribbean Carrier A/S (OCC) with whom we partnered in 2020. I have known Alf Andersen, CEO of Oslo Bulk, for over 25 years when he worked and lived in New Orleans.  We have a good chemistry, low overhead, wealth of combined knowledge and OCC has the strongest presence in the Caribbean with a minimum of 10, owned, multipurpose vessels with a lifting capacity up to 120 m/t strictly trading USG/Caribbean/NCSA/ECCA.  OCC are mainly focused on forest products and steel parcels and have numerous contracts in place, which we agreed would be complimented greatly by extending the service to include project cargoes that Dan-Gulf could bring to the table.  Consequently, we formed a partnership, and thus far, we have been off to a good start. Due to customer demand at this stage, it has already been necessary to charter additional tween deck tonnage to cover all our combined requirements with vessels sailing from mainly Houston and Mobile, but also Panama City and Savannah to most of the Islands in the Caribs, and regular service to Colombia, Mexico, Belize and so on.

Our strength in the area is the number of vessels strictly trading within the Caribbean segment along with a variety of contracts.  That gives us a lot of flexibility others cannot do, and the tonnage we are trading has a very good DWCC intake of a shallow draft.   Besides that, the combination of the knowledge/relationships our experienced team has covers a lot of territory and gives us an advantage in the constant puzzle at hand to parcel and make profitable voyages, while at the same time, providing reliable service to our many loyal clients to whom we are very thankful.

Houston always stands out in worldwide marketing as the most known Gulf port for transhipment of breakbulk cargoes. Could you, with your experience, point out a few alternatives for our readers?   The reason I ask is that I lived in China for many years, and it was always Shanghai that got the attention, not the equally capable and much cheaper ports near to Shanghai.

That’s a good question, Bo.  Houston is really the main hub for well over 90 percent of the project cargoes moving ex the USG I reckon.  However, for forest products, Mobile is also a good alternative for project cargoes, with competitive stevedoring. For sure we can offer very competitive rates to the Islands/NCSA such as the Dominican Republic, Haiti, and Jamaica, just to name a few ex Mobile for project cargoes, when we combine it with the forest products already scheduled to these destinations, which also includes St. Croix, St. Lucia, Trinidad and Guyana among others.    Another alternative for some of the larger projects as opposed to Houston are some of the Louisiana out ports, such as Port Fourchon.

Tell us a little about some of the most complex transports you have handled into the Caribbean area via the US Gulf.  Or can you simply elaborate on a couple of projects that you have handled irrespective of destination?

One of our biggest challenges was a project into the then shallow draft port Roatan, Honduras for the Roatan Electric Company (RECO) for whom we moved power generation equipment ex Houston.  DB Schenker and Alliance Power participated as transportation intermediaries.   The first shipment out of two consisted of 12 LPG storage tanks, each measuring more than 133 feet in length (40.5 meters) and each weighing about 80 metric tons.  The voyage took place in July 2016 after 9 months of voyage planning and job site preparation, including dredging alongside the discharge terminal.  The length of these tanks stretched over the entirety of the vessel’s lower hold, tween and weather deck.  They were loaded and discharged using the ship’s two cranes in tandem.  In order not to overload the ship’s cranes, their rigging had to be adjusted while the tanks were being lifted precisely into their stowed position.

The trick of having sufficient crane capacity with sufficient outreach while having a vessel able to arrive at Roatan and safely discharge with 4 meters (13.12 feet) draft was one which few other vessels in the world could have accomplished.  The attending port captain, Joshua Jordan commented “At the planning stage, it appeared to all that two of the tanks would not be within the tandem lift ranges.  With our knowledge and experience, we determined that the rigging could be adjusted.  We proved our theory was correct during loading at Houston and reconfirmed it discharging at Roatan, even while the vessel sat separated from the pier by 3 meter (9.8 feet) Yokohama fenders to avoid the shallowest water.”  All the rigging at Houston was supplied by the vessel, and all the cargo and crane handling on board was handled by the ship’s crew.  Additionally, fishing boats and a small tanker vessel were moved, allowing for our vessel to come alongside.

Other than that, we have moved everything from popcorn to Scud missiles along with warheads from the Med to the USG.  At that time, the wall was still up in Berlin, and we were requested to remove the entire East German crew, which we accommodated by replacing them with a Philippine crew supervised by Greek officers.  There were discussions about having a US navy escort for the vessel, but Washington settled for placing an escort person on board the vessel to watch out for the cargo. Upon the time of arrival at the USG discharge, I asked the Greek captain, “How did your escort do?” and he replied, “He was seasick for about 23 days!”

I think that is what makes shipping one of the most interesting jobs in the world—every day is usually different. You never know what to expect, and you learn new things on a regular basis, even after more than 40 years in the industry.

How has the business been hit during the COVID19 pandemic in the US?

Our business was hit pretty hard during the COVID pandemic in our specific segment of the Caribs, but mainly the oil and gas industry sector.  The mining, bulk, and forest products markets seem to have been somewhat stable, and we are finally starting to see an increase of activities on the project side as well. So, we currently have 12 vessels in the Caribbean service in order to keep up with clients’ demands, but for sure, another setback with the COVID-19 pandemic could quickly change things in a negative manner. Although I still think there will be several tough months, there is light at the end of the tunnel.

Looking into the crystal ball, what do you see as the future in shipping for you & your company?

Well, I am 63 years of age but energized  and still very motivated for a variety of reasons, so as long as I have fun and the health to keep doing what I have been doing for most of my adult life, I will likely continue another 3-4 years.  Eventually, you need an exit plan, and there are several ways to slice the salami, so we will see what the future brings as the ships keep moving.

How is it possible to get in touch with you?